Top Posts
RIP, I am truly sorry!
Ignorant and Hopeless
You are not alone.
I am 20 years old and I had...
My Second Abortion
words I couldn’t say to him
If you’re considering abortion please read this
Three Abortions
I feel so lost
What if…
I am pro-choice, but I regret my choice
The denial inside my mind.
Abortion Testimonials » All Testimonials » My Testimony after having an Abortion
All Testimonials

My Testimony after having an Abortion 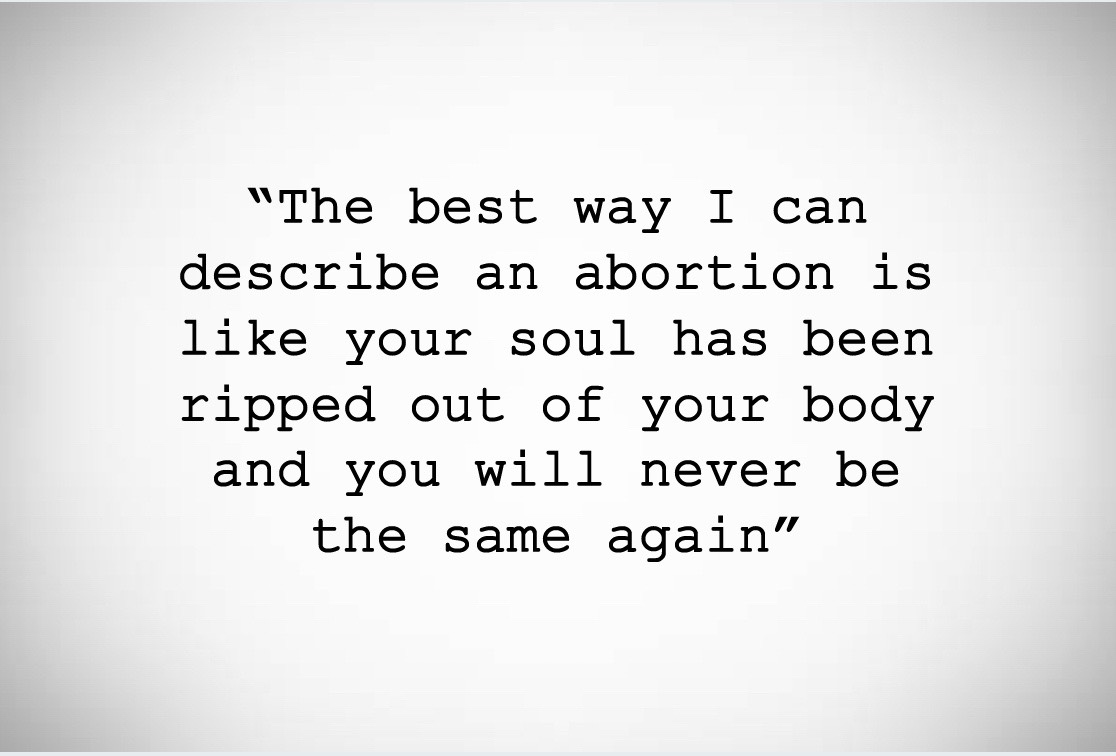 When I was a senior in high school I had a abortion not by my will but by my parents after I had a abortion I had so much guilt and shame. I never talked about it. I left my family’s home 6 months after the abortion I couldn’t stand my parents or to be in the same room with my parents. I never even ate dinner with them I ate in my bedroom with the door locked. I went to church as a child But salvation was never mention in the church so my parents where not saved and either was I. I didn’t get saved till I was 37 years old.

I started using drugs and selling my body to get the money for the drugs after my abortion. I couldn’t stand not to be high because the pain and the nightmares of the abortion was so bad. I needed something to numb the pain so I used drugs and sex the abortion clinic told me it was a procedure and the baby was just tissue. I will go on with my life that was not true don’t believe their lies.

I suffered deep depression for years due to the abortion no medication help. I didn’t go to church or have anything to do with God for about 20 years. Because I felt I was unworthy to be a Christian and how could God love someone like me I killed a baby. I felt why didn’t God stop it well I held on to this for years.

Then I blamed myself. I could of said no, but I didn’t. I was 18 years old i was legal age people younger than me have had a baby. Well I got saved and I thought everything was finished with the issue of the abortion I really did. Then I went to a healing service at my church one Sunday the pastor said if anyone who ever had a abortion come up front. The first thing I thought… oh know what are they going to think about me if I confess this horrible sin please Lord i can’t do this i started to panic. I really didn’t want to go up front but the holy spirit pushed me out of my chair that Sunday. The pastor also said that Sunday that God told him to preach on past sins it was memorial day weekend. He said even if the abortion even took place along time ago right then and there I knew that was God was using my pastor that got my attention.

I went up front I started crying hectically from know where I have never did that before I couldn’t stop crying. I couldn’t even look at the pastor or the lady praying for me in the eyes because I felt so ashamed and guilty about the abortion. I didn’t know I had these’s emotions inside of me. I went home and I laid down for awhile after church.

I woke up my heart felt different it was like 20 pounds was lifted off my heart it was like the chains of guilt and shame was gone i felt happy. I have a new heart I finally have freedom from the past and I can breath without all that heaviness. I never know I had that much guilt and shame but I guess I buried it so much inside of me I didn’t know I had it.

6 months ago I would never have told anyone about the abortion because I was so ashamed of it and I felt guilty about it. Then Jesus told me to start telling people about my abortion because it’s my testimony and I shouldn’t be ashamed of it anymore. I forgave God my parents and myself for the abortion that took place in 1979. I have held onto this guilt and shame that long it’s the worst thing that has ever happened in my life and I finally have freedom from it.

If you have had a abortion God can set you free you from the guilt and shame that goes alone with having a abortion and give you freedom from the past. If your thinking about a abortion please don’t do it. It will destroy your life. The depression and guilt and shame that goes along with it is awful it’s like you’re in your own living hell. The best way I can describe a abortion is it’s like it’s your soul has been ripped out of your body and you will never be the same again. And no drugs or sex can fill emptiness inside of you Only Jesus can. I don’t know why that abortion took place but one thing I do know if I never would of had that abortion I would of never be the Christian. I am today. God told me one day in church what my baby’s name is. He said his name is Thomas and he looks just like my daughter.

Since I have freedom in Christ from the past God has laid it on my heart to pray for women who has a abortion and the aborted babies that has died due to a abortion. It gives me so much pleasure to pray for this I can feel there pain and sorrow. I feel that God has finally gave me a purpose through prayer my new heart has so much Love and peace now I feel like a new person inside and out. There’s not a day that don’t go by I don’t think about Thomas. but one thing I do know he’s in heaven with The heavenly Father. Well this is my testimony God can forgive you of any past sin and give you freedom from your past you just have to trust in Jesus to give you freedom.

Bless you. God gave Jesus for the forgiveness of all of our sins. Praise him for saving you. Now you and Lil Thomas will be reunited in Heaven!!