Top Posts
RIP, I am truly sorry!
Ignorant and Hopeless
You are not alone.
I am 20 years old and I had...
My Second Abortion
words I couldn’t say to him
If you’re considering abortion please read this
Three Abortions
I feel so lost
What if…
I am pro-choice, but I regret my choice
The denial inside my mind.
Abortion Testimonials » All Testimonials » My tragic story abortion kills a child and later can cause breast cancer
All Testimonials 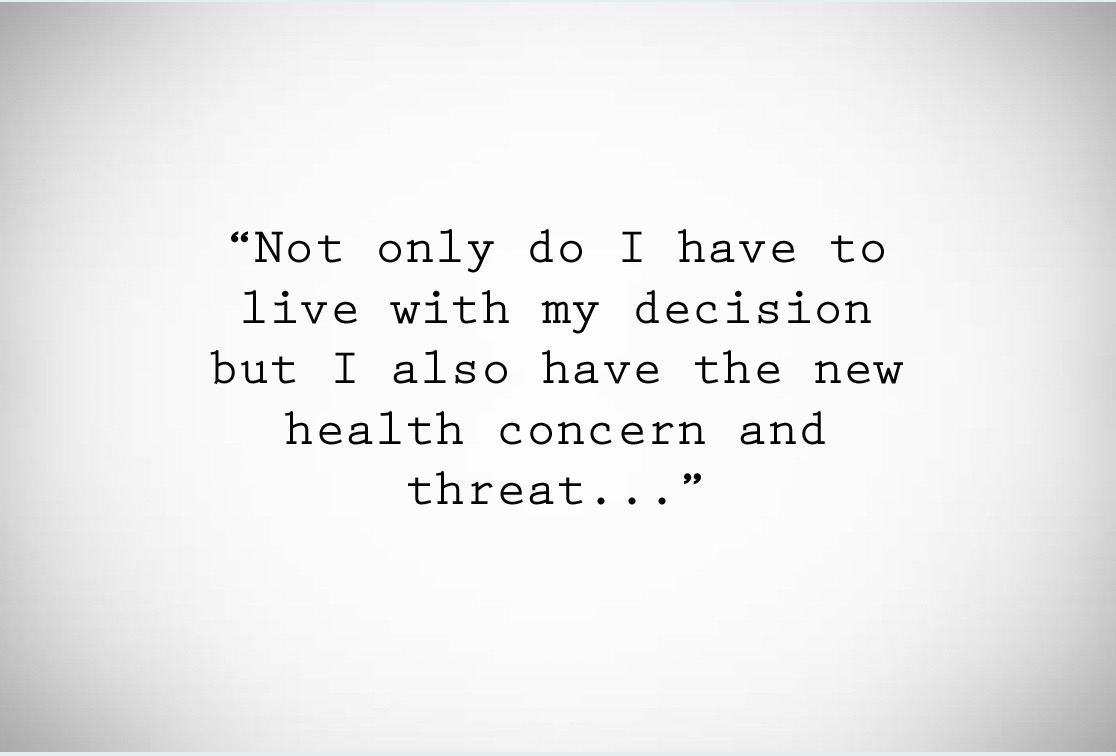 To anyone who is pregnant, young or older and not sure what to do, I urge you and beg you to read my true story. Maybe you’re not pregnant and just reading stories on here and if so, please feel free to share my story and take it to heart. When I was 20 years old, I became pregnant and like many, I was scared and not sure what to do. I listened to family members who told me that I had my whole life ahead of me and that having the baby would “ruin” my life. One family member even told me that I would get big and fat, that nobody (including my boyfriend), would want to be with me and would go elsewhere.

I had an ultrasound at only 5 weeks along and could clearly see the heart beat on the ultrasound screen, as small as it was. I was touched by this and so was my mom (grandma), witnessed it as well. However, as time went on, my anxiety, uncertainty, and indecisiveness grew. When I was close to 10 weeks along, I saw another ob/gyn whom a relative recommended who performed abortions on a regular basis. She let me hear the baby’s heartbeat loud and clear, telling me that the heart beat sounded healthy for unborn babies of this age in the womb. I still could not believe in it and was very overwhelmed. She told me that the time was very close to where I needed to decide whether or not to have an abortion since I was getting close to the end of the 1st trimester and the baby was very much developed, despite he/she being about two to three inches in length.

My boyfriend at the time wanted the baby. He would lay his head on my stomach and cry, saying things like, “I’m trying my best to save you.” He knew I was very overwhelmed and stressed and was having a very tough time making a decision. He really wanted to be a dad. On January 16, 1996, a relative who felt abortion was the “right” thing to do drove me to the clinic. I was crying the whole way there out of guilt and fear. We first got to a clinic and found out we were at the wrong place. I was still crying as I noticed a very pregnant woman announcing that she was pregnant with twins to someone. I felt then by the delay of arriving at the wrong place that this was one more sign I should not go through with it but…the increasing fear and anxiety of having a baby and the unknown of it all took over once again and we headed to the other place which was a surgical center. I sat in the waiting room and cried. My relative told me comfortingly, “I’m telling you, this is the most loving and caring decision you could make. The quality of life is as important as life itself.” Soon they wheeled me in on a gourney, me still being clearly emotional and in tears. Regardless, none of the staff or the doctor asked if I was sure I wanted to go through with this. Had they asked me, I would have said, “no” and walked out.

I was soon in the operating room. I remember seeing clear coiled tubes on a table which my unborn baby would be dismembered and sucked through and I heard cheerful music being played, as if it were just another routine “surgery” about to be performed. I woke up later in the recovery room feeling very drugged and almost in disbelief that my baby was gone. A part of me had wondered if maybe they could have made a mistake and I still had my baby inside of me somehow. When I had to wear pads throughout the day due to the typical bleeding that takes place after an abortion, the reality of the permanent decision I made became all too real.

Meantime, years passed and I discovered something else I least expected which made me realize abortion can kill or harm more than just an unborn baby. A year ago I was diagnosed with breast cancer. I had surgery and radiation and declined chemo, as well as an estrogen receptor blocking drug called tamoxifen because both of these things can damage or destroy fertility and eggs. Being that I am in my late 30’s with no children, I just couldn’t see myself risking this. I’ve learned that even with fertility preserving methods such as freezing eggs, success rates are not very high so I made the decision not to go with all recommended treatments.

I don’t care what the doctors may tell you or may not want to tell you, abortion can greatly increase the risk of breast cancer. My type was lobular hormonal receptor positive and there are empirical scientific articles supported by research out there that clearly state there is a correlation between abortion and breast cancer because when a pregnancy is suddenly interrupted, there are changes in breast cells that take place because the cells are originally preparing to produce milk and the process is suddenly stopped, leading to the risk of irregular cell growth (cancer). These are not studies that are on religious sites or pro life sites. THESE ARE SCIENTIFIC ARTICLES that most doctors want to brush off. Don’t get me wrong, different factors can cause breast cancer and people can get it anyhow, but more than half the people who get it are much older than I and when you hear about younger people getting breast cancer, you really have to examine the situation and be educated about the abortion breast cancer link. I’m speaking from my own experience (and others’ out there). My experience speaks for itself. Keep in mind, I never drink, do drugs, etc, and have always tried to have a healthy lifestyle.

It’s an understatement to say that I regret my decision. Not only did I take an innocent unborn life, but part of my life was robbed as well. My child will never get to call me mom or blow out his/her birthday candles. He/she never had the chance to live because someone else chose for that baby. My child would have been 17 years old last August and I’m 38 now with no children. The father of my baby in heaven has since married and states he will probably never have the opportunity to have children again. I have not tried to get pregnant due to my career not being finished and my relationship situation being up in the air. I’ve never wanted to have a child out of wedlock and wanted to make sure that if I am blessed enough to become pregnant again, I want it to be the right situation. However, it’s reality that someone in their late 30’s has a much lower fertility rate than in their 20’s or early 30’s. Eggs age no matter what and in general, pregnancy is more difficult to achieve and maintain even if not impossible.

Not a day goes by that I don’t think of my child and what he/she would have looked like or been like personality wise. I always remember the August due date. Please know that there is a beating heart at only 3 weeks along and people don’t even know they are pregnant until way past then. Not only do I have to live with my decision but I also have the new health concern and threat of the breast cancer returning and having to wonder if it will rob my life too soon. If it weren’t for the abortion, there is a very high chance this concern would have never had to enter my mind. My story is proof that abortion can very well go beyond killing an unborn child…it can also haunt you later with a serious health threat (and possibly your life) down the road. I also have to now be concerned that with a possible future pregnancy, my hormone levels will go way up, possibly putting my risk of cancer recurrence very high. Not fun to have to worry about this and certainly not worth it!!!!!!!! Although it would not replace my unique child in heaven, I pray to be blessed with another baby and that I will be given another chance to have a baby in this life, living a long life with that child.

In closing, in memory of my child, I will share my story with as many as possible, in hopes they will take my story to heart and help to save unborn babies’ lives as more people choose against abortion. Please be aware that there are millions of people who cannot conceive and are on long wait lists for adoption, while tons of unborn babies are killed and devalued through abortion each minute. Please hear me, please trust me, abortion is not the easy way out! The reality of the decision will come back to haunt you later in life, (if not right away), emotionally and/or health wise!!!!!!!!!!!!!

Please don’t hesitate to contact me at caremints@aol.com and I will be there for you. Thanks for reading my story!!!

A mother who will always be…